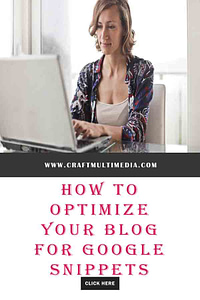 Getting organic traffic from Google search engine is getting difficult this day with a lot of competition in your blog niche. Gone are the days where your newly created blog can rank higher after some months giving you the much needed organic traffic that your blog needs.

Another problem new and established blog face is the sudden reduction in the number of organic traffic due to Google Featured Snippets which display result higher than result n the position 1.

When you ask any question, Google displays a box with a short answer, image, and link to the blog, this box rank higher than blog that occupies the first page in the SERP. This box is called featured snippets and help to increase visibility, click-through rate, and organic traffic.

If your content is selected on featured snippets, your blog post will definitely get more exposure from Google thereby helping you to get the much-needed traffic.

What is Featured Snippets?

Featured snippet is a single and unique result selected from a list of other results that is displayed in a small box to give user answer faster.

The main reason why Google introduced featured snippets is to give the user the answer to their query faster, without leaving the Google search engine and display the blog link to allow the user to visit the site for more information thereby leading to increase in organic traffic, revenue, and blog page view.

If you think I am lying, Search Engine Land conducted an experiment to check if getting featured in snippet increase organic visitor, and their result shows that the website experience an increase of 516% in session, the click-through rate (CTR) of the page increase from 2 percent to 8 percent and the revenue from organic traffic increase by 67 percent.

The next step is to understand the different type of featured snippets that is display on Google.

How to Get Feature On Google Featured Snippets

We already know the benefits that you can get from being on featured snippets, this makes it one of the most popular methods that SEO used to get higher traffic to their website.

But what new blogger don’t know is that there is no official guideline from Google on how to make your post optimize for featured snippets.

This statement from Google has stopped a lot of blogger from optimizing their content to be on featured snippets. But there are steps that you can take to help your content in order to get the blog visibility on Google.

According to Ahrefs, they conducted research on the probability of new content to be on featured snippets and the result shows that 99.58% of featured post on featured snippets rank in the top 10 on the Google, if you are not sure of their finding, you can also conduct your own experiment by asking question trigger and see the result for yourself.

Steps to Take In order to Feature on Featured Snippets

I have already explained the query that trigger featured snippets, the next steps is how to be in a position that improve your chance of being featured.

Following this step will help your blog post to be feature on featured snippets which will increase your blog page view and revenue. Do you have any questions, share with us in the comment box.

10 thoughts on “How To optimize Your Blog For Google Snippet”

This website uses cookies to improve your experience while you navigate through the website. Out of these cookies, the cookies that are categorized as necessary are stored on your browser as they are essential for the working of basic functionalities of the website. We also use third-party cookies that help us analyze and understand how you use this website. These cookies will be stored in your browser only with your consent. You also have the option to opt-out of these cookies. But opting out of some of these cookies may have an effect on your browsing experience.
Necessary Always Enabled
Necessary cookies are absolutely essential for the website to function properly. This category only includes cookies that ensures basic functionalities and security features of the website. These cookies do not store any personal information.
Non-necessary
Any cookies that may not be particularly necessary for the website to function and is used specifically to collect user personal data via analytics, ads, other embedded contents are termed as non-necessary cookies. It is mandatory to procure user consent prior to running these cookies on your website.
SAVE & ACCEPT